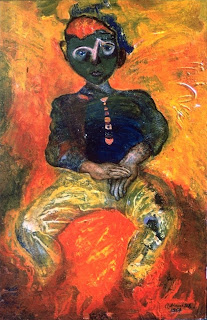 Bill Rabinovitch was an engineering student at Worcester Polytechnic Institute when we first met. Then he went on to become a fighter pilot, and then a hippy painter living in the Haight Ashbury section of San Francisco. He came to visit once and left the kitchen sink filled with unwashed paintbrushes sitting next to my baby's sterilized bottles. I was not amused.
Eventually he moved to New York and created over 2,000 hours of video archives of all the museum, high end gallery and alternative space openings in the city. This invaluable footage included interviews with the top artists, their collectors, the gallerists, the directors and the curators. This footage became fodder for Bill's cable show "ArtSeen" which proved highly popular for many years.
Our paths crossed again while waiting for admission to the Outsider Art Fair one bitterly cold winter day. I learned that he had become somewhat of a NY legend. He had just written a film called Pollack Squared which was to open at the New York Independent Film Festival. His very appealing paintings now hung in NY galleries. He composed respectable music. I forgave him for the mess in my California kitchen and we resumed our friendship. I learned that Bill also wrote some exceptional screen plays about artists, including the highly acclaimed Picasso and the Weeping Women. If you can get a copy of his films, or watch them on the internet, you will be delighted. In the meantime, here's one of my favorite Rabinovitch paintings for you to enjoy. I think I remember that shade of orange in my sink!
Posted by Beverly Kaye at 2:38 PM 4 comments: