Book of the Gospels, updated! 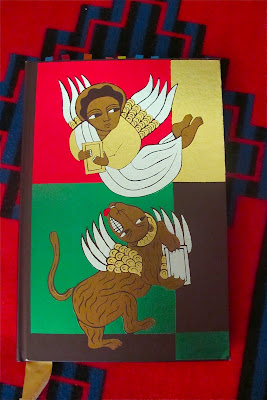 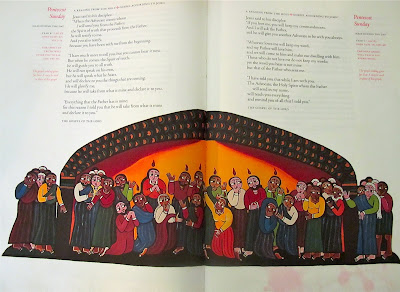 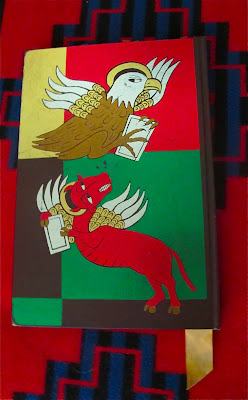 Self-taught artist Laura James got quite an unusual request from the Catholic Church! Could she make 34 paintings for a new authorized version of the Book of The Gospels? Leaning on her Antiguan heritage, Laura produced a body of work that is simply breathtaking. When completed it was show at the Divinity School at Yale University to very high acclaim. This elegant book is now actively being used in the Catholic Church throughout the country. The richly embossed gold and leather cover depicting an angel and a lion on a background of green, red, brown and gold, are a mere hint of what is inside. No longer is this a simply a white man's tale......all races are depicted, and the Gospel according to Christ is greatly enhanced by the inclusion.
Laura James writes:
As a child I had a big book of Bible stories where everyone was sort of a yellow ochre color, except for the blond and blue-eyed Jesus and servants who were gray and strangely apelike. Even then I recognized that this was a racist depiction.
Later, I felt vindicated when I saw Ethiopian iconography and impressed with Ethiopia’s ancient Christian heritage… and I decided that painting in that style was a good way to show multicultural diversity in Biblical figures to a western audience.
To this end my work has been used worldwide by numerous Christian denominations and is at the forefront of the movement toward more inclusion in religious art. To me the work is traditional but still contemporary because of the time it’s being done and because it’s being done by me, a Black woman from Brooklyn, who’s never even been to Ethiopia!
Posted by Beverly Kaye at 7:37 AM 16 comments: