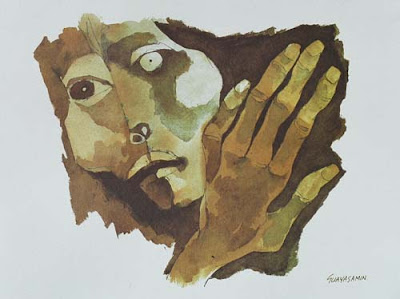 This signed piece was created by the world renown Ecuadorian artist Oswaldo Guayasamin who died in 1999. Guayasamín used his paintings and sculptures to combat "cruelties and injustices of a society that discriminates against the poor, the indigenous, the afro-ecuadorian and the weak" explains the Guayasamín Foundation, which is a museum dedicated to his works. He never belonged to a political party, but rallied in support of Castro and against the "abuses and aggressions of powerful and imperialistic countries".
He and I corresponded with each other for a brief time, and he generously gifted me this lovely example of his work. The artist was famous for his series illustrating the injustices forced upon mankind and the consequential sorrow. The way he portrayed expressive faces and hands is reminiscent of the works of the late American artist, Ben Shahn. This powerful watercolor measures approx. 13" x 17.5 " and is on good quality paper. A watercolor of this size was auctioned off at Christie's in 1995 for $4600. Asking $2500
Posted by Beverly Kaye at 1:08 PM