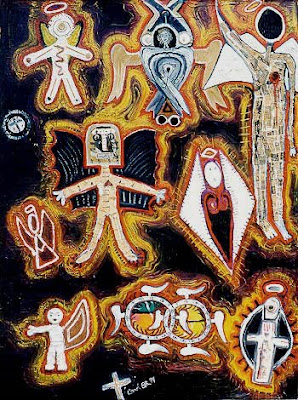 Carol Es is an artist whose works reflects an ongoing struggle with the past as well as success with the present. She often hid in the bowling alley and created art, instead of attending school. She was later influenced by work she did in a sewing factory, and  often employs fabric, patterns and thread with her newer works. But this earlier piece is 30" x 40", mixed media on paper and is a prime example of her art. It's called "Poor Little Angels" and is $2500. Carol's handmade books have won her national acclaim and are part of permanent museum collections. A multi-talented artist.
Posted by Beverly Kaye at 5:16 PM